Switching from PC to Mac 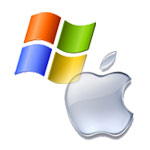 About a month ago I setup dual monitors on my Windows Vista PC. I had an extra monitor lying around and my video card supported two DVI devices, so I figured it would be worth it to utilize the extra screen space. Unfortunately, it became the cause of major problems and forced my hand to switch to my Macbook full-time.

Once I setup the dual monitors, the screen would flicker on and off for a few seconds about 3x a week. It would either recover and give me a little message saying “Atikmdag has stopped responding and has successfully recovered”, or it would crash completely and go to the blue screen of death. It was annoying, yes, but I dealt with it as I searched for a solution to rid myself of this issue.

This persisted for a few weeks, until one morning I awoke to find that my computer had crashed at some point overnight. I rebooted and attempted to login. As explorer was loading, the computer crashed. I found this weird so I tried it again and the same thing happened – right to the blue screen of death before Windows could load completely after logging on. I restarted the computer and left it at the login screen. As you might imagine, it crashed again without providing my login credentials. I restarted in safe mode and everything worked fine. This seemed to indicate a driver issue, but I could not update the drivers in safe mode.

I searched Google for any and every possible solution to this problem – uninstalling specific Windows updates and patches, altering MSCONFIG boot options, taking out all but one RAM module, searching for the BSOD error or stop messages – nothing worked. I posted on the AMD forum since they are the manufacturers of my video card, and I got two recommendations – check the power supply to ensure it has the juice to drive two external displays, and upgrade to Windows 7 because there was a known issue with this line of video cards and Windows Vista. Great.

I spent weeks with this issue and I did not think it was worth it to buy a new video card, since this wouldn’t guarantee a working PC (and since Windows has been the cause of many frustrations over the past couple of years). I have a Macbook which I used when I wasn’t on my PC, but with all the complications that arose out of hooking up dual monitors to my PC, I decided that it was time to migrate from Windows to Mac.

I have attempted to document my switch from PC to Mac with the following series of tutorials and instructional blog posts:

Transferring Files from PC to Mac via Ethernet

Transferring Your iTunes Library from PC to Mac